LICO Machinery has been manufacturing multi-slide screw machines since 1978 (CNC Cam machines until early 1990’s). LICO introduced their CNC products in the United States in 1990 by opening its own manufacturing operations in Texas. LICO’s Texas plant produced various specialty parts for the U.S. automotive industry.

In 1996, LICO introduced the LNTS series. This series comes with 3 or 4 multi-slides and an 8 position turret allowing for overlapping of up to 5 tools at one time. The LNTS series is also offered in a 3 turret model for extensive back-working and a Y-axis model equipped with a Y-axis gang tooled cross slide for both static and live tools. 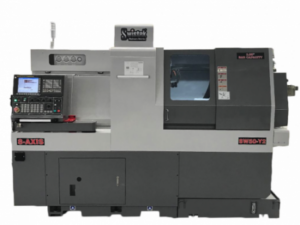